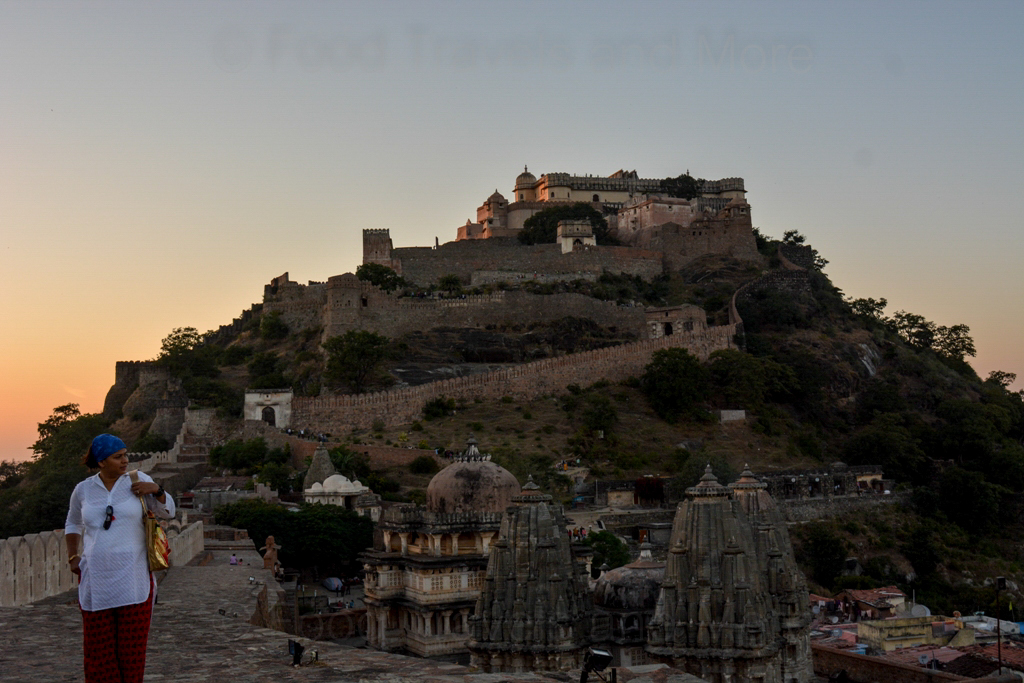 It was our return from Delhi to Pune and the very first stop we planned was Kumbhalgarh. It has the second largest stretch of wall in the world after the “Great Wall of China” and some places you may find written as “The Great Wall of India”.

Through some narrow roads towards the end, it was sometime by noon when we reached Kumbhalgarh. There are fewer hotels available to stay but good thing is many of them are pet friendly and pocket friendly too. Kumbhalgarh is a very basic town with a small market although few cabs are available for the fort visit.

After doing some rest we headed towards Kumbhalgarh fort around 3 pm, it was still little hot outside in the month of November. The way from the town to the fort is little narrow with sharp curves but it was scenic. There are good parking place available. From quite a distance itself the fort shows its glory which sets your expedition.

This fort is built by Rana Kumbha in the 15th century, Kumbhalgarh is the most important fort in Mewar after the Chittorgarh fort. Located at a height of 1100 m above sea level and surrounded by a difficult forest terrain, this fort was used as a refuge by the Mewar royals in times of danger. The walls of this fort extend to a massive 36 km. Strategically located, the fort is hidden within the mountains that one cannot notice unless he is close to the fort; however from inside the fort one can get a very good panoramic view. Another significance of Kumbhalgarh is that it is the birthplace of Maharana Pratap, something which naturally makes it a pilgrimage for any Indian worth his salt.

After taking the tickets (Rs. 5 each), we entered the fort through Hanuman Pol, its main gate. There is an interesting story about Hanuman Pol, it is said that Rana Kumbha was being frustrated in his attempts to build the fort. He was then told by a sage that it would need a human sacrifice to build the fort, and that the gate should be built at the place where the head of the sacrificed man fell. After a lot of search, one person volunteered to be sacrificed. Hanuman Pol was constructed where the head fell and a shrine was constructed by Rana in his memory.

As one enters the gate, he finds himself at a crossroad of the sort. On the left goes away uphill to the palace – Badal Mahal, on the right there are a number of temples along the wall. Straight is a way which goes steeply downhill that we walked a mile but after that we assumed that it went to a small village inside the fort. So we walked back to the main gate once again, and it was quite a difficult climb which took good 20 minutes and we were tired already.

But the fort motivated us to explore and we started the climb to Badal Mahal. There was a Ganesha temple at the bottom from where we entered through a huge gate studded with spikes. Now we had reached to a point from where we could see the round walls of Kumbhalgarh down. It was an awesome view and while Keerti sat to take some rest, I climbed to a point to click some photographs.

Finally we crossed the last gate and reached the royal enclosure. On our right was Kumbha Mahal and on left was a sign board for the place where Rana Pratap was born. This is known as Palace of Queen Jhali, although it was locked. Nevertheless, we went to the Kumbha palace. An old banyan tree, quite corridors and empty chambers which must have been very busy once upon a time; after looking around for some time, we went towards the Badal Mahal.

Main gate of the palace

Badal mahal was built in the 19th century and one of the most recent structures of Kumbhalgarh. It has two separate parts, the women’s and the men’s quarters, both connected by a set of corridors. The rooms were decorated with beautiful paintings, the bases usually depicting elephants in peacetime and war. The women’s quarters had windows with elaborate nets through which the ladies could look around. From the upper floor, one could get a 360 degree view of the fort. It was nice to see the sunset from here and a nice breeze made us to stay around for more than an hour there. 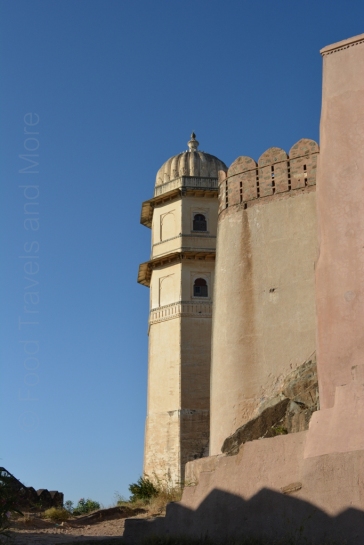 We spend a lot of time roaming around after that we started to descend and straight went to see the temples. The most remarkable of all the temples was the Vedi Temple, a Jain temple built by Rana Kumbha. As we climbed the wall of the fort, we could see a lot of temple at a distance, but we were too tired and dehydrated to walk anymore. There shops inside the fort from where you can buy refreshments although they charge you more than the print price but there was no other option available.

If you are at Kumbhalgarh do not miss the light and sound show and this was the reason that we stayed there for a night. It was an amazing experience to know the history of the place better and lights during the night gave quite a different perspective of the building.

The light and sound show mostly talks about Rana Kumbha and the history of Mewar. This 40 minutes show is worth the time, especially since it is an open air theater and the night view with lighting effect is mesmerizing. With a day well spent we went back to our hotel for the next day drive to Udaipur.